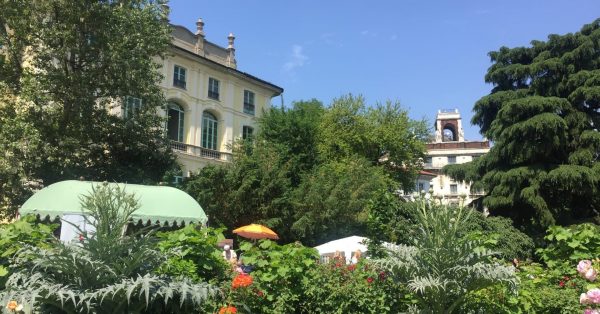 Things to do in Milan when it’s hot! Green ideas

Are there things to do in Milan when it’s hot?  Yes there are!
With temperatures rising and summer now in full swing, exploring Milan might become a serious challenge. Find here some reasons not to give up your Milanese tour… by including some green areas. Milan offers both traditional and unexpected green corners that will make your experience worth despite the heat.

Find some shade in the public parks

Starting from the classics, find some shade in the public parks. As you probably already have been to the Castello Sforzesco, you know it opens onto the beautiful Parco Sempione. Located in the heart of the city centre, it is the first that comes to mind, and a walk there after a tour at the fortress is surely one of the things to do in Milan when it’s hot!
Beside this central one, Milan offers other lovely green spots, like  Indro Montanelli Gardens.  They are the oldest public park in the city, established in 1784, and still among the most beautiful. If you have any difficulty finding them, ask for the Gardens of Porta Venezia, as so they were called until 2002 and Milanese, well… tend to cling to certain habits!

Both if you need a break from the summer heat or simply some moments of peace, Indro Montanelli Gardens are ideal all year round. Trees, ponds, bridges and small waterfalls are a real joy, an oasis of peace in a busy city. Furthermore, two other interesting spots are to be found within the leafy ground of the Gardens: the Natural History Museum (with its dinosaur skeletons!) and the Milanese Planetarium that circumscribe its boundaries. Needless to say, that both are ideal if you travel with children.

Well, as I’m writing in this hot days, I can’t help but think of my favorite moment of the year at the Indro Montanelli Gardens: Orticola, the Milanese Flower Show that takes place here in May… and makes the Gardens look magical!
I understand that, being now August, it’s a bit late to write about it. I’m also aware that Flower Shows are probably not the reason you came, or will come, to Milan but, in case you are still planning a trip to the city and you like flowers, well, choose May! Orticola Flower Show will definitely surprise you and add a touch of wonder to your Milanese stay. It is, no doubt, the most colourful among the events that colour the busy Milanese schedule… and yes, the most romantic!

A brief history of Orticola

Orticola Flower Show takes place in Milan since 1996, not a long tradition, yet one that grows strong and counts 160 exhibitors as well as some 30.000 visitors during the 3 opening days.
Longer then the show, is the story of the Lombard Horticultural Society that organizes it. It was born in 1854 on the model of the French “Société d’Horticulture de France” and with the philantropic aim of improving and protecting the city’s green spaces, which they still do.
Ok, the fresh air of may is long time gone and so are its Flower Shows, but Orticola’s activities have much more to offer, even in hot August! And this brings us to the next green Milanese experience: the vegetable garden!

The advent of urban vegetable gardens in big cities begun after World War II, both in Europe and in the United States. Little known is that, since the Eighties, they exist even in the busy Milan and… believe it or not, the city has become a true example of horticultural cultivation next door!

Several vegetable gardens in the Milan area are carried out by associations or privates, or directly managed by the City of Milan. Surprisingly, one of them is to be found in the luxurious City Life district. Here 2,000 square meters of revisited Italian vegetable garden have been set up, by Orticola gardeners, just below the new high-rise buildings, to guide visitors to discover biodiversity.
So, as City Life is definitely a must-see in Milan, not only for its amazing architecture, but also for the super-large green area it is immersed in, why not take advantage and extend your promenade to enjoy its vegetable garden?

By the way, you already know everything about City Life, right? If you don’t, well, it’s the futuristic new district that’s now in place of the former Milan Trade Fair area. A state of the art brand-new neighbourhood composed by elegant residential buildings, commercial towers and green spaces that cover an overall area of 366,000 square meters in the north-west of Milan based on a master plan by Daniel Liebeskind, Zaha Hadid, and Arata Isozaki. If you want to know more, read here.
And, if it is still too hot, remember that City Life also has a brand new shopping mall… with air conditioning (we probably should officially add air conditioning to the things to do in Milan when it’s hot!).

Discover a most unexpected green spot at Vertical Forest

If you are a fan of contemporary and you enjoyed City Life and its green, there is something more Milan might offer you: the Vertical Forest!
Located in ‘the other’ newest Milanese district, that of Porta Nuova, the Vertical Forest is a pair of award-winning residential towers literally covered in trees (you see, we promised classic, but also unexpected green!)
The construction started in 2009 and was completed in 2014, and since then, it won numerous awards including the International High-rise Award in 2014 and the Best Tall Building Worldwide in 2015.
Both an example of how to eliminate urban sprawl and pollution, this one really deserves recognition as a botanical world wonder!

Vertical Forest vegetal system accommodates approximately 800 trees, ranging from 3 to 9 meters high, and about 4,500 shrubs and 1,500 other plants distributed in relation to the façade’s position towards the sun.
It aids in the construction of a microclimate, produces humidity as well as oxygen, and absorbs CO2 and dust particles. It’s a true ‘living Façade’ as the exterior is constantly changing colours with the seasons and, yes, it is breathtakingly beautiful!
If you wish to know more, you can read here, or arrange your Acànto private tour to properly explore it.
So far, there’s just one Vertical Forest, and it’s in Milan but, as it proved a good idea, others will follow: Forêt Blanche, in Villiers sur Marne, Liuzhou Forest City in Liuzhou, China, and Trudo Vertical Forest in Eindhoven,  Wonderwoods in Utrecht, are ready to be built.
And what about a Vertical Forest on Mars??!! Check here, but let’s make it clear… we’ll let you go first!

How to get there: