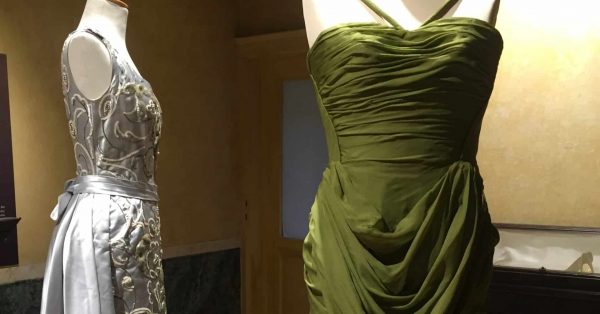 Outfit '900 versus Milan Fashion Week. Our alternative way to outlive the September fashion craziness in Milan.

Outfit ‘900 is a stylish fashion exhibition opened last year and still on display at Palazzo Morando in Milan. What does it have to do with the starting of Milan Fashion week? And why should it be one versus the other? Well, it’s because we believe it could be an ideal escape from September fashion craziness in Milan!

The fashion week is about to begin, with its electrifying energy and its colorful madness. It is undoubtedly the home of some of the world’s best-loved bi-annual fashion shows but, unlikely the Design Week, not an inclusive event.
Only those who are in the business actually participate to catwalks and parties. What is left to the rest of us is the electricity it leaves in the air, few truly elegant gentlemen and ladies strolling around, and thousands of crazy outfits worn by a multitude of self confident fashion addicted that will probably make us smile, or even laugh but, is it really what you are looking for? We believe not.

In the chaos of events and people, we want to go against the flow and encourage the lovers of glamour and elegance, to experience the pleasures of fashion in a different way. So, if you happen to be in Milan while the Fashion Week is on, and you are done with all the crazy stuff around, here’s our off the beaten path suggestion to put into your Milanese to-do list.

Outfit900, open until November 4th 2018 at Palazzo Morando, is a gem of good taste. It sums up the story of Twentieth-Century costume in 23 dresses selected among those belonging to the municipal collections. As the Twentieth-Century was a period that saw the most rapid and revolutionary changes in dress so far, do not expect the experience to be quiet. On the contrary, the exhibition path will be an exciting journey through both history and taste, and will also reveal valuable information about the social role of women over time.
Two different sections are dedicated to day and evening gowns. They show outfits tailor-made for dinners, weddings, theatre premiers, afternoon concerts as well as court gatherings.

Outfit ‘900 the gowns from the start

The oldest outfit on display dates back to 1900. It is an amazing S-curve dinner gown with sparkling beads and lace. The waist is so tight it hurts to look at. And thinking about the rigid boned corset that also required a maid helper to be worn make it even worse.

Then there are the wedding dresses; an unusual one from the Thirties is made of dark blue silk velvet. The picture displayed next to it shows the bride also wearing a large fur collar. Yes, a photograph of the wedding day literally gives a face and a story to the dress. Consider that a large number of items in the collection come with documents from the donors. It helps retracing the story of costume and make the collection a valuable one.

A lavish wedding dress from 1952 is white and opulent. With its wide veil and the long train it shows how the end of the Second World War became a reason to celebrate, be beautiful and spend money! Just a couple of years after, a much more discrete high waist wedding dress dates back to 1975. Particularly troubled because of terrorism, the Seventies in Italy were a challenging, and maybe confusing time even in fashion.  Completely  is the pink wedding gown from 1990: knee-length skirt and double-breasted jacket with shoulder pads… should we say more? It reminds of soap operas like Dallas or Dynasty and, well, I guess it could hardly be a choice today.

Outfit ‘900 the evening dresses from the Twenties

The most exciting rooms are those fulfilled with evening gowns… ah, so beautiful!
Among the first to appear is a white dropped waist evening one. It was especially made in 1922 for a court gathering from the House of Worth. In the era of Art Deco planarity, even the body was conceived of as essentially bi-dimensional.
Liberty&Co also is present with a 1925 asymmetrical evening outfit. It is all sheer fabrics and pleats to give freedom of movement, while fringing, beads, and tassels swayed with the beat in the roaring Twenties!

Outfit ‘900 the evening dresses from the Thirties to the Fifties

The Thirties were even more fashionable. Cloth was cut across the grain. This technique, called bias cutting, used more fabric but produced flattering gowns, which had sweeping skirts but clung to the bosom and hips. The amazing purple 1930-35 bareback outfits from the House of Worth prove it. So Hollywood like!
And then Dior’s New Look came along, once more repudiating the natural lines of the body by citing the eighteenth and nineteenth century silhouettes. The Curiel evening gown ‘floating’ in the entrance room perfectly symbolizes the return to femininity with an exquisitely constructed piece. If the Curiel evening dress was meant for a very young girl, the sexy green one from 1950-55 definitely belonged to a more feminine and curvy woman. Its high heels shoes, also on show, embody the idea of a woman that knows how to be both, mother and diva.

Outfit ‘900 towards the new millennium

As year 2000 approached, that of fashion became a more and more intricate path. Since the Sixties Pucci forged a radical departure from convention with its colored impalpable veils. Not only the reflection of a sexual revolution, but also of a new shape for the body. Super slim bodies could wear tights and leotards.
The multifaceted Seventies often revisited styles from previous decades or faraway Countries.  Yves Saint Laurent clearly did in his 1976 gala dress: definitely too far from nowadays idea of Haute Couture’.
And let’s not forget a bit of Japanese influence in the elaborate taffeta blouson Krizia created in 1988 that closes the exhibition.

Outfit ‘900 is at Palazzo Morando

Palazzo Morando, whose complete name should be Palazzo Morando Costume Moda Immagine, is located in the heart of the fashion district, which is also the reason why this beautiful eighteenth-century dwelling, started as a collection of historical paintings, has become the hybrid and multileveled site for both history and fashion we can now enjoy.
Moving through the rooms of Palazzo Morando means getting lost in elegance: the beautiful paintings, the haute couture costumes and the lavish décor of the interiors.

So, why waiting? While the often unsalvageable bad taste of the fashion bloggers want to-be invades the city during the Milan Fashion Week, find some peace at Palazzo Morando and enjoy its cosy yet super classy exhibition Outfit ‘900.

You might also wish to know some more about fashion and museums in Milan, if you do , check this out on our website.