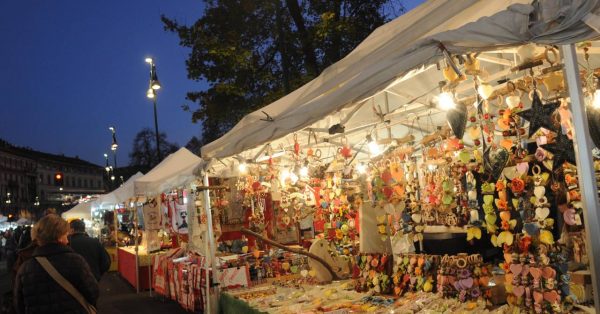 Things to do in Milan in December

Displayed along the perimeter of Sforzesco Castle, the super coloured stalls of the Oh Bej! Oh Bej! market are THE thing to go see in Milan in December.
Be careful: do not confuse the most traditional of Milanese markets with any Christmas market. This one is special, and it has an ancient origin that started with a Pope, and not any Pope, but a Milanese one!

Let’s start from the beginning and go back to 1510, a time when the Milanese spirituality was certainly not at its best. Precisely for this reason, Pope Pious IV sent a man from Rome, to revive devotion and faith towards the Saints. His name was Giannetto Castiglione. Giannetto arrived in Milan on December 7, the day in which S. Ambrogio, the patron saint of Milan, is celebrated.  He had a hard task and was little optimistic about the reception of Milan so,  with great practical sense, he decided to bring along gifts.
To announce his arrival, Giannetto started shouting ‘Oh bej! Oh bej!’ that more or less means ‘Nice things! Nice things’… or was it the kids showing their enthusiasm for the gifts? Anyway, a crowd of Milanese immediately surrounded him and, all together, Giannetto and the citizens reached the church of S. Ambrogio.
Since then, every year Milan arranges the Oh Bej! oh Bej! market.
Since even today the Milanese crowd the fair, a space wider than the church square and surroundings has been found. Starting from year 2006, the market is set up around the Sforzesco Castle for everyone to enjoy.

Many are the goods to look for at the market, ranging from food to nice artisanal Christmas gifts. But if you want to really feel Milanese, try the ‘Firun’, a string of smoked chestnuts dipped in white wine. It was once sold by the ‘firunatt’, that wore the chestnut string on their shoulders, like long necklaces…
This year Oh Bej! Oh Bej! Market will open on December 5 and last until December 8.
Don’t miss it!