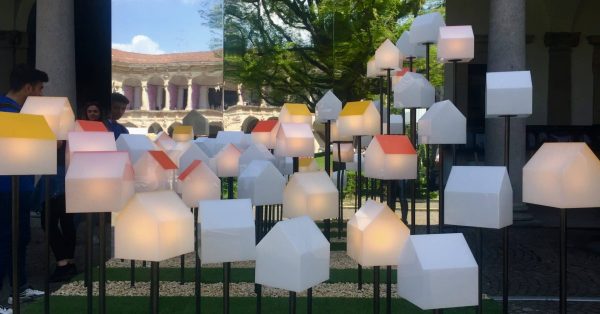 Milan Design Week 2018 puts design on display sprawling throughout the city. But what is it all about? Here's a brief history of the 'Fuorisalone', the most up-to-date and most fun event of the year in Milan.

Milan Design Week, what is it all about?

Milan Design Week 2018 is on!
The Milanese Design Week is not a trade fair, but a cultural kermesse that puts design on display sprawling throughout the city.
It is top of the list when it comes to have fun, feel part of a cool community, believe in creativity and convince ourselves that, if not beauty, design will save the world! But what is it all about?

Milan Design Week, a brief history of the Fuori Salone

Once upon a time – it was 1961! – the Salone Internazionale del Mobile (International Furniture Trade Show), was founded in Milan as a vehicle for promoting Italian furniture and furnishings exports.
It was a promising start, as the early 1960s were the years of the ‘Italian economic miracle’ and the moment  when Italian design reached its apogee after the post-war years. Everything seemed possible and much more was to follow.
Since the first editions, the ‘Salone del mobile’ attracted many people, including a large number of foreign visitors. It was clear that there was some potential, and the need to exploit it arose quickly. It was the furniture manufacturing company Cassina, the first to have the idea. They used their city centre store to double the exhibition space and show their products to more people, while the official trade show was open and its visitors were still in Milan.

Since the 1970’s having a second space in the city became usual and with the 1980’s the company stores started to be replaced by more striking temporary venues. The first to do so were some of the most rebellious and provocative designers of the period like Alchimia and Memphis. All of a sudden, it was clear that the Salone del Mobile and the city itself, had become synergetic. On the pages of “Abitare”, back in 1983, this new phenomenon, was first defined  as the ‘Fuorisalone’.
Shortly afterwards, it was up to Gilda Bojardi to make it official! It was her to create and publish the first guide to the Design Week: a calendar including all the coordinated events of the week.
So, it was thanks to a woman, who happens to be still in charge of the design magazine “Interni”, that the Design Week has become what it is nowadays.

The birth of Design Districts

Since the 1990s, the appearance of design installations in the streets, became familiar to the Milanese and so did  the legendary parties arranged by the leading design brands, set in unusual, and sometimes memorable, locations!
The spontaneous development of the Fuorisalone, started to become more organized with the 2000s, when some  spaces, like the cloisters of the State University, became an ad hoc location.  A little further form the city centre, the first Fuori Salone district was also created in a former industrial area: that of Zona Tortona. A real road sign system was set, the studios were opened for everyone to visit, private apartments were transformed into temporary exhibition spaces, and free beer and wine corners made their appearance. Music also became part of the show and memorable evenings took place contributing to add glamour.

Given the number of areas, streets, courtyards, galleries and shops making part of the design circuit, a good planning is needed to be able to see them all… But here is one last place not to miss: the Triennale di Milano! Always lively, the Triennale becomes a real reference point during the Design Week, and an unavoidable appointment. House of the Triennale Design Museum, the first museum of Italian design, it also hosts many exciting Fuorisalone events and exhibitions throughout the week.

While you are there, do not miss the new exhibition Triennale Design Museum Stories. Italian Design, as usual, it won’t disappoint you!

On the wake of the Milanese one, the development of international Design Weeks is surely increasing. There are Design Weeks in London, Barcelona, Paris, San Francisco and Tokyo just to mention some. But one thing is sure, Milan stays the design reference point in the world, and the most fun.
Enjoy!