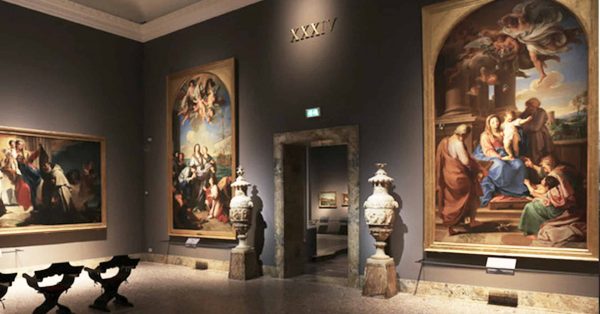 Make the most of the Brera Art Gallery

What not to miss to make the most of the Brera Art Gallery in Milan.

Brera Art Gallery definitely is one of the most intriguing museums in Europe and one of the essential destinations for getting to know -and love- Milan.
In the following lines we would like to explain you why, and give you suggestions on what not to miss on a tour at Brera. Enjoy the reading!
Consider that in today’s world Brera Art Gallery represents the idea of a modern museum, but it is at the same time among those of the oldest foundation. It seems a contradiction, so… let’s start with a little history.

Brera was founded in 1776, as an articulated modern cultural centre. Right from the start it hosted the Academy of Fine Arts, the Lombard Institute of Sciences and Letters, an astronomical Observatory, the Library and the Milanese botanical garden. It was the result of the orderly modernization carried out in Milan by the Austrian government and a real secular pole of culture, in opposition to that of the Ambrosiana, founded in the 1600s by Cardinal Federico Borromeo.
The art collection was started together with the starting of the Academy, and -specifically- for educational purposes… it was the Enlightenment!

While Milan was being updated, Paris was already starting the Revolution … and the Muséum Central des Art de la République, later simply referred to as the Louvre was be one of its sons since 1793.
Brera Art Gallery origin is not that of the Louvre, but the two certainly have something in common: they share the effects of Napoleon’s wars and politics subsequent to the Revolution. Milan, was chosen by Napoleon as its Italian capital, and the need to make it look like a real one made the Academy’s educational collection take the form of a proper museum, in the wake of the Parisian one, as early as 1809.

While in Paris, the Louvre collections dramatically expanded thanks to the spoils of war, in Milan, in addition to that, also the suppression of religious orders contributed. The painter Andrea Appiani and Giuseppe Bossi, the legendary director of the Academy back then, governed the acquisitions and the development of the collections. Since 1805 Eugène de Beauharnais, godson of Napoleon and Italian Viceroy, also contributed to the growth of the first Italian ‘national’ museum following the model offered by the Louvre.

The Brera collections, thus formed, included works from the territories that were conquered by the Napoleonic armies. The Lombard ones, but also many from the  Pontifical States, and from Veneto, so that today Brera has one of the richest Venetian art funds in the world.
Also some Flemish paintings by Rubens and Van Dyck make part of the collection thanks to exchanges with the Louvre itself.

When to go to Brera Art Gallery

Visiting Brera is simple, there is no need to pre-purchase tickets, nor to wait in line for hours. Simply reach the ticket office at the first floor – take the grand stairs at the end of the courtyard- and directly purchase the tickets.
Normally there are no queues and moreover, the opening time is very extensive: at 8.30am to 7.15pm.
Be careful though, remember that on Monday, like almost all the Milanese museums, Brera is closed and that the first Sunday of the month you risk queues – even very long – because access is free (even in this case, it is not just Brera, many other museums and sites in Milan and Italy adhere to ‘free Museum Sundays’).

Something special to start your tour at Brera

Maria Teresa Hall at the National Braidense Library
Once you pass the entrance to the Brera Art Gallery, you will find yourself in front of a large window overlooking the impressive reading room of the Braidense Library.
The imposing portrait of Empress Maria Teresa hanging on the central wall immediately reveals the link between Brera and Austrian rule in Milan, while
the eighteenth-century walnut shelves designed by architect Piermarini, show their beauty and elegance. The room is now  used for exhibitions and cultural events, but the library is still in full use and it is open from Monday to Friday from 8.30am to 6.15pm and Saturday from 9.00am to 1.45pm.
If you wish to see the great drop-shaped Bohemia crystal chandeliers up close, you can access from the entrance of the library, from the staircase that you will find along the corridors of the Academy at ground floor.

KNOW WHAT NOT TO MISS AT Brera Art Gallery

You might be familiar with the work of Andrea Mantegna if you have had the opportunity to visit Mantua, the birthplace of this extraordinary Renaissance master. There, his frescoed ceiling of the Camera degli Sposi, is a masterpiece of perspective illusion. Illusionistic perspective is also the point when it comes to the Dead Christ housed in Brera to:  it is possibly the most famous example of foreshortening in the history of art.
Modern in every possible way, and maybe even cruel, it shows the corpse of Christ lying on a marble slab. No sanctity feeling, no idealisation, just a close-up on a real and really dead body, watched over by a weeping Virgin Mary.
The only concession to the raw realism of the whole composition is the forcing of the rules of perspective to resize the feet of Christ in the foreground. Mantegna’s sense of truth was not without a touch of gentleness.

If Mantegna’s work is about perspective, here is the size that makes the difference. With its 137 × 303 inches, this colossal canvas is one of the largest in the world. Part of a cycle of paintings dedicated to the story of the patron saint, this one was commissioned by the Venetian confraternity of the Scuola di San Marco, to painter Gentile Bellini.  As it was not quite finished when its author died in 1504, it was his younger brother Giovanni Bellini who completed it, requested to do so in Gentile’s will.
Historians are uncertain about which details belong to each of the two brothers, but no one denies the qualities of this impressive work of art.

Are you less fond of the Renaissance than you are willing to admit? It’s only because you haven’t met Carlo Crivelli yet!
What can we say about this unique master of the early Renaissance? Well, first of all that he really is unique. What he has in common with its contemporaries is the linear elegance of the drawing, festoons of fruit and symbolic references, the perfectly simulated marble details. What makes him different from all others is its reach vein of fantasy, the fabulously fraught and emotional faces, the three-dimensional gesso details. Meeting Carlo Crivelli will forever change your idea of Renaissance.

If Carlo Crivelli managed to confuse you, Piero della Francesca will confirm that Renaissance perfection exists and derives from mathematics. Order and symmetry in this huge work of art, are not just matter of style, they reflect the idea of a universe that’s based on harmony as a result of geometry. This altarpiece, commissioned by the lord of Urbino, Federico da Montefeltro, for his burial place, is so tied to the history of Brera that it is often referred to directly as the ‘Pala di Brera’.
What could we say about it? This work is simple perfection… and mistery at the same time! Have you noticed the ostrich egg? Why is it there?

Raffaello Sanzio – The marriage of the Virgin

Placed in the same room with Piero’s work, here is another example of perfection.
The Marriage of the Virgin, dating from 1504, shows how Raphael had absorbed the lesson of his teacher Perugino, from which he directly derives the general structure and iconography of this work, as well as Piero’s mastery in perspective. Held in a sunny place, the temple above and the  marriage scene below, all elements are connected by geometry. Everything is logical and rigorous, but also graceful and peaceful, including the young man in the foreground that brakes the rod that didn’t blossom (the story of  the wedding is told in the apocryphal gospels and later in the Golden Legend:  all men carried rods, he that owned the one that blossomed, was to become Mary’s husband).

You cannot leave Brera without a glance at Francesco Hayez celebrated Il bacio, a true icon in Italian Romantic art. Painted at the closing of the Risorgimento, the long and complicated independence fight that eventually brought the peninsula to become a State, it was welcome as a symbol of the newly unified Italy. But it is not just matter of politics, shown for the first time at the annual Brera exhibition in 1859, Il bacio was an immediate success. Why? Because it frames a true, romantic and passionate kiss!

GET A BREAK AT Bar Fernanda

Under the guidance of director James Bradburne, Brera is renewing itself in order to really equal the great European museums and renovation includes a brand new Café! Bar Fernanda, open at first floor at the end of the Gallery tour, is named after Fernanda Wittgens, the first ever woman to run a museum in Italy in 1940. Fernanda Wittgens also was the responsible for the survival of the works of Brera removed and rescued from the bombings that destroyed 26 of the 34 rooms of the museum during the Second World War. She also has been the promoter of its reconstruction… after having spent 7 months in prison for anti-fascism.
Isn’t a coffee or an aperitivo the icing on the cake after a day dedicated to art and beauty?

One last thing before you leave

Brera Botanical Garden
Let’s share a secret! There is a garden at the back of Brera’s building and not just any garden, but a botanical one. Tiny, it measures 5.000 square metres only, it is a lovely hidden and silent oasis of peace in a busy city.
Once an orchard where the Gesuits cultivated medicinal plants, it was made a proper botanic garden with the starting of the Brera School of Botany. Nothing has changed since then, even if, since 1935, it is the University of Milan that manages it.
Save some little time after your Brera tour to enjoy the narrow flowerbeds and the tiny arboretum hosting the two Ginkgo biloba trees aged two centuries and a
half that became the symbol of the garden.

Make the most of your time by booking an expert art historian to accompany you visiting Brera! We will be happy to show you what you cannot miss… and much more!
Go check here to book your Brera tour with Acànto.