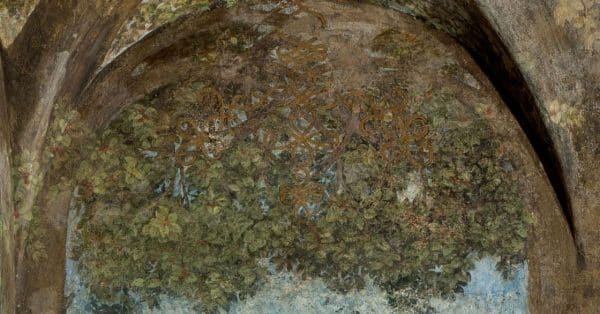 LEONARDO AT THE SFORZA CASTLE

The Sala delle Asse at the Sforza Castle

The Sforza Castle in Milan appears enormous to those approaching it. Imposing and severe, yet friendly in its own way.
It is now some 650 years since the Visconti family founded it in 1368, and not yet 600 since its renaissance under the Sforza in 1450.
Over the centuries it has been many things: a safe home for the Dukes of Milan, a place of abandon after their fall and, for the many years to follow and up the Unification of the Country in mid 19th Century, a large barrack for the armies of the foreign rulers that succeeded one another.
Today it is a place of leisure thanks to the presence of a beautiful city park at its back, the Parco Sempione, and of culture, as it houses museum collections and libraries.
But what was it like in the age of Sforza?

The age of the Sforza

The arrival of the Sforza in Milan had marked a new course, their reconstruction of the Castle was in the sign of embellishment, they modernized it and slowly changed it from a typical defence structure into a Renaissance residence, also thanks to the choice of a Tuscan architect, Filarete , more updated than the locals.
Since 1467, the Sforzas left their former residence beside the Duomo, to move to the Castle and with their presence, its rooms were gradually set up and decorated, lined with wooden planks and draped with expensive embroidered fabrics.  The green areas were turned into enchanting gardens. Celebrations and ceremonies were frequent and luxurious.

The last 20 years of Sforza rule, under Ludovico il Moro, were those of the greatest splendour. Luxury was an instrument of political control and promotion, and the Castle became one of the most interesting places in Europe, frequented by intellectuals, artists and scientists summoned to Milan from all over the peninsula.
Even his wife, the young and charismatic Beatrice d’Este, contributed to the lively atmosphere of the court, as elegant and influential as a true trend-setter.And then came Leonardo, settled in Milan since 1482 at the service of the duke, with whom he had a complicated yet pivotal and fruitful relationship.

Leonardo at the Sforza Castle

Yet little remains of Leonardo’s presence and work at the Castle.
His creations were ephemeral, like the impressive settings for the official celebrations, or they remained on paper, like the new design of the central tower of the Castle or the grandiose equestrian monument to Francesco Sforza, both of which were never made. Others went lost, such as the decoration of the “salette nere” (3 small rooms at ground floor), of which only a few written notes remain.
Yet something survives: the Sala delle Asse.

A large room located at the base of the northern tower of the castle, the Sala delle Asse was already in use under Ludovico’s predecessor Galeazzo Maria Sforza, but it was thanks to Ludovico that it became the innovative and unique space we can still admire today, although to a small extent.
It was then used as a ceremonial room, and must represent him, his power, his prestige, the solidity of his government.
The task was entrusted to Leonardo, who took inspiration from those ephemeral architectures he had often created for the occasional court celebrations. He designed an outdoor setting, defined by the interweaving of the branches of leafy trees. The tribute his work was to pay to Ludovico,  was signified by  the choice of a specific tree: Mulberry tree, which, in Italian, was also called ‘Morone’ or ‘Moro’ reminding to the duke’s nickname. A nickname honoured by court poets of the time and linked to a passage by Pliny the Elder (AD 23–79) in its Naturalis Historia, which celebrates the Morone as ‘the wisest of plants’, because it is the last to bear flowers in spring, without risking them being hit from frosts. A useful talent for a statesman.

But the absolute novelty of the Sala delle Asse decor is not to be found in symbols and political references,  but in the representation of nature. Leonardo’s trees are not a mere study of botany, nor a late Gothic millefleur tapestry, on the contrary, they are a representation of a fertile nature, prodigal of fruits. We are at the height of summer, when mulberry fruits turn red. The allegorical transfiguration of the composition in no way limits the veracity of the phenomenal nature.
It is exactly here, in Leonardo’s room, that the life of nature begins to be part of the artistic imagery.

What is left of Leonardo’s work

But it was 1498, Ludovico was about to be defeated by the French. The Castle was first occupied by their soldiers and then abandoned. Leonardo had no time to finish his work and the fall of the duchy meant that his intervention went quickly lost while the echo of it among other artists remained limited, if not non-existent.
Partial as it was and still is, repainted and poorly documented, the Sala delle Asse, remains unique, and is now subject to a study begun as early as 2006, while an ongoing investigative restoration work was started in  2013.

In the year of the celebrations for the 500th anniversary of Leonardo’s death, an exhibition is open until January 12th 2020: In the shadow of the Moro. The Sala delle Asse. It allows visitors into the room to admire the surviving monochrome decoration and other exceptional traces of preparatory drawings emerged during restoration works.

If you wish to know more about our Leonardo tours, check here. We will be glad to help you discover more!