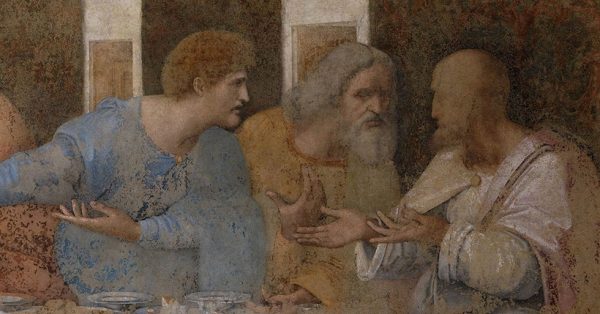 Times are changing at the Last Supper, including Last Supper tickets availability!
The times seem to change at the Last Supper, and for the better. Getting closer to 2019, when it will be 500 years since Leonardo’s death, and after two years of studies and careful observation, some innovations will be introduced as reported by the Milanese newspaper “Corriere della Sera”, in an article dated January 2nd, 2018.

What innovations should we expect at the Last Supper?

Those we were actually waiting for: the air will be cleaner, more people will be allowed in the Refettorio, the selling system of the Last Supper tickets will be improved, …and the painting will, optimistically, last longer!
But let’s go by order.

Was there something wrong with the Last Supper?

Of course! Starting from the very first day, when Leonardo himself, back in 1494, decided he wanted to experience something different from a good, traditional ‘fresco’ painting, many things went wrong with the Last Supper. The pigments constantly falling from the wall. The opening of a door in the middle of it in 1652. The presence of ill-mannered French soldiers under Napoleon throwing stones at it, and the awful summer night when a second world war bomb miraculously missed to erase it once and forever.

The need to save it

If the times we almost lost it are quite a few, many are those we tried to save it as well. Seven distinct attempts in all, with a last one that, alone, took 20 years of work and devotion. But, being it a real need or the wish to be ‘the one that saved it’ (as some experts complain that the non stop intervention makes the handwork, paradoxically, more fragile) some more is up and coming.

Fresh air for the Last Supper, an environmental restoration

Starting with the work of University of Milano-Bicocca, Cnr, Politecnico di Milano, University of Bologna and Hong Kong, and thanks to the contribution of the Italian marketplace chain Eataly, a  state-of-the-art filtration system will be installed.

More room for the visitors

Today, up to 30 people can enter every 15 minutes, for a total of 1,310 entries per day. Not many, and this is one of the problems when finding tickets. Now, the “Corriere della Sera” informs that a scientific committee set up by the General Secretariat with the Museums Directorate, the Superintendency and the Istituto Superiore di Restauro, confirms that the Refectory of Santa Maria delle Grazie has passed tests: the air inside the room is good. The particulates remained below the threshold, with averages of 3 micrograms per cubic meter and a maximum of 4, much lower than the data of two years ago. Thanks to this data, more people will be allowed and there will be an increase of 15% per day.

So, apparently, the air is clean and the refectory is going to welcome more of us. But will tickets be as hard to come by as usual? Probably not! A new arrangement for the management of ticketing services will be introduced starting from July 2018. Rules that constrain the buying and reselling seem to have been established.
Fingers crossed then, and… enjoy your perfect experience at the Last Supper with a made to measure Acànto guided tour!