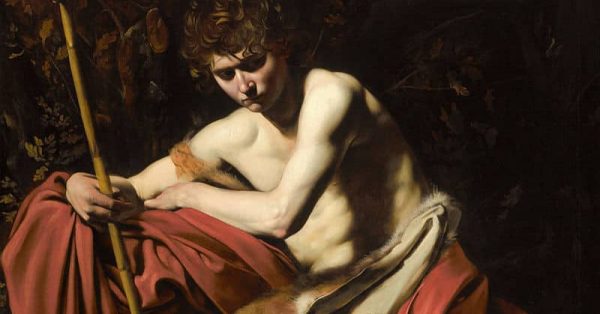 Inside Caravaggio, Milan ….what an art exhibition!

Housed in Milan at Palazzo Reale, Dentro Caravaggio –Inside Caravaggio– was worth waiting. Displaying 18 works together for the first time ever (from September 29th to January 28th 2018), it offers a fascinating journey through its work , and his troubled life and time.

Caravaggio’s works on display, from early days to the end of a revolutionary journey in art and life

Starting with the Repentant Magdalene, one of his first works already showing a non conventional realism and a hint of rebellion suggested by the use of a friend courtesan as a model, the display takes us by the hand from the beginning to the end of his career.
The Rest on the Flight into Egypt, the Fortune teller, and the intense Boy bitten by a lizard deepen the knowledge of his research on composition and use of light and explain us his working method.
The Ecstasy of Saint Francis is faithful to the texts (in this case that of Saint Bonaventura), but true to the anatomy of the bodies as well. It is not by chance if the beautiful angel holding the ecstatic body of Francis is not a six-winged seraph, but only wears simple wings reminding to those of a real bird… truth at all costs is the key to Caravaggio’s work.
Two versions of Saint John the Baptist seem to dialogue with an old Saint Jerome in meditation showing how Caravaggio was able to range from youth to old age with the same truth, but also the same grace.

And then, the intense Crowing with thorns -the lesser known version owned by Banca Popolare di Vicenza- and the large and impressive Flagellation from Naples, open the view on a most dramatic human condition, that of pain, both psychological and physical. A sign of the time, given the life changing event that occurred in 1606: the murder of Ranuccio Tomassoni. By accident? On purpose? The reason of the intensification of his work non the less. As Eduard A. Safarik once wrote, Caravaggio came to explore with unparalleled depth, similar only in Shakespeare’s tragedy, the perennial conflict between the prosecutor and the victim.
The last rooms tell about the escape to Naples and the extraordinary experience in Malta, testified by the Portrait of a knight of Malta, of unsure identity, but definitely the most amazing and intense portrait ever made by Caravaggio. And a last masterpiece The martyrdom of Saint Ursula, painted in 1610, the year of his tragic death, concludes the journey.

Inside Caravaggio benefits of a clever (and fun) multimedia equipment that provides a short video with radiographic images  for each painting. Simply a door open to the artist’s workflow, from the first intuition, throughout his concerns with the composition, to the the final touch. Thanks to this, we are to discover secrets: like the inclination of the head of Olophernes (Judith and Olophernes) that was changed 3 times to achieve the most dramatic climax, as well as the subtle traces Caravaggio used as a guidance, mostly without drawing… and I’ll tell no more!

The reason of this effort made by the curators is due to the fact that all the paintings on show recently underwent an extensive work of research and analysis, leading to a new awareness of Caravaggio’s methods and genius.

Inside Caravaggio, some practical info

And if you wish to visit the exhibition with us, send us an email.