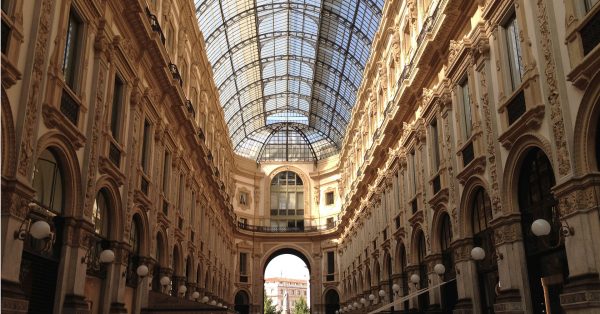 A real gem in the Milanese landscape, Galleria Vittorio Emanuele II is capable to distract the eye from the ravishing Duomo.  Find here some more of its history and traditions.

A Milanese shopping mall, a European passage like no other

One of the most outstanding Milanese architecture opens onto Piazza del Duomo with a monumental arch. It’s the Galleria Vittorio Emanuele II.
Built in between 1865 and 1867, it was not the first of this sort, on the contrary, the genre itself was already starting to decline when this one came along. Nonetheless, this latest, tired and possibly conventional creature, was to overcome all others and completely revitalise the category itself. Its unheard monumentality literally revolutionised the panorama of galleries around Europe. 32 metres high roofs that rise to 47 at the top of the dome and a diameter of 39 meters… the Milanese Galleria became an undisputed model throughout the world, and still is.

“For its proportions the Italian creation far outstrips all that has gone before it” was written in the Encylopédie de l’architecture et de la construction by Pierre Planat in 1889.

Under the crystal sky

Thanks to a complex logistical organization and an army of men at work, the term of two years for the construction was respected. The Galleria opened on September 15th, 1867, and projected Milan towards an international horizon of modernity.
Building the iron vaults and the central cupola took about 5 months, a very short time for such an innovative building practice and material. Once it was finished, this transparent sky was not just the most innovative part of the construction, it also became the most striking part of it.

Grandeur and mistery at Piazza Duomo

If the crystal sky lent the Gallery a particularly modern flair, it is the grand entrance facing Piazza Duomo that makes it so impressive.
The completion of the arch required some longer time while financial problems and the mismanagement of the building contractor obliged the municipality to purchase it to finally have it achieved. A second opening ceremony took place late in February 1878. It was not as cheerful as that of 11 years before as architect Giuseppe Mengoni, died falling from the scaffoldings less than a month prior to the opening. Was it an accident? Was it suicide due to the money issues or the pressure he was subjected? An official inquiry led to no conclusion.

Despite all troubles, the Gallery was a success. It was blessed with people while activities took place not only in the shops at ground floor, but also in the internal units of the building. Tailors and fashion houses, watchmakers, photographers and decorators, publishers and newspapers had their spaces. Not much has changed since then. The Gallery still plays a key role in marketing strategies. No surprise if all the big players of Made in Italy long for a window or two along its sides.

Shopping is a serious thing at Galleria, but the real key to its success, always were -and are- the meeting places. There are the historical ones, starting with Camparino, a landmark place when it comes to a true Milanese aperitivo, or at least a good -very good!-, coffee. Motta Milano 1928, recently redesigned to look brand-new.   Also an historical restaurant is  Savini… whose name rhymes with tradition itself.  But Milan also aims to be contemporary and makes room to new adventures:  the latest is the ‘house-restaurant’ from starred chef Carlo Cracco in Galleria, literally just open (February 21st 2018) and intriguingly ambitious, with its 5 floors dedicated to food and glamour!

Rituals at the gallery. The rattin

So, in the end, what is it that makes the Gallery so dear to the Milanese? The answer is: traditions. Do not be mistaken, Milanese run fast, but never forget their habits and always celebrate their rituals. A daily one took place at dusk in the era of gas light, when a small sophisticated device was set to run around the dome to illuminate the Gallery. This machine was something similar to a little train running on rails and as swift as a ‘little mouse’ which, in Milanese dialect is Rattin.
Rattin, who had speed regulator, brake system and a state of the art technology, was started by a spring and ran around the cupola lighting it as it passed some six hundred gas jets along its way… one truly unmissable performance that enchanted the Milanese for 18 long years, until electricity came along.

Spinning on the bull in Galleria

If rattin is no longer in use (but we can still see it at Palazzo Morando, where it is kept), another ritual survives since the first days of the gallery: that of spinning on the bull!
Here is the story. A multi-coloured marble and enamel mosaic floor covers the gallery pavement. It was designed to honour the first cities of the new born Italian Country: Milan of course being the host and then Turin, first capital of Italy from 1861 up to 1865, Florence, capital of the Country until 1871 and Rome, capital since then. Their coats of arms are portrayed on the floor, and that of Turin represents a bull.
For some reasons we actually cannot explain (let’s leave out all the weirdest and silly ones), we believe it brings good luck to spin on the bull. Do it three times counter-clockwise. And if you do, be careful: place your right heel on the bull’s… balls, or it won’t work!

A little yet brilliant exhibition  at the Sforza Castle, illustrates  the story of Galleria Vittorio Emanuele II  until March 18th 2018.

And if you wish to visit the Galleria (or the Exhibition!) with us, send us an email.