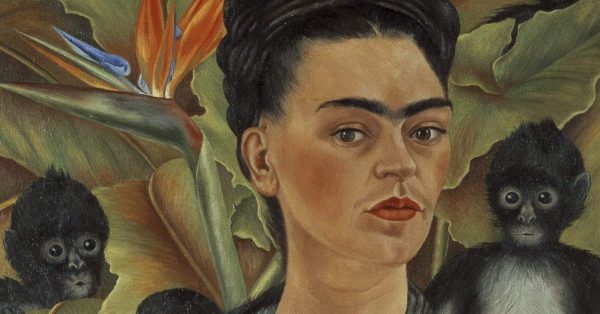 Frida Kahlo Beyond the myth

Frida Kahlo Beyond the myth, open at MUDEC-Museum of Cultures in Milan from February 1 to June 3, 2018,  aims to celebrate the iconic Mexican painter and reconfirm her talent through a new investigation on her work and life.

Those who think they know everything about her, each detail of her troubled and intense life and loves, the traditional Tehuana costumes she used to wear, the lips painted red, her injuries, her  political activism… will be surprised!

It is true, many are the exhibitions dedicated to Frida Kahlo in Mexico and around the world in this last years, as well as movies, documentaries and biographies; most of them regarding her as a social phenomenon and making constant reference to her colourful and tragic life as the main, if not only content of her work.
As the title – Frida Kahlo Beyond the myth – announces, this new one,  promises to try a different path.
…and it all starts with a mystery revealed.

Diego Rivera, painter and Frida’s husband, established a trust fund to take care of his and his wife work and made his long time friend Dolores Olmedo director of their museums, opened in 1958. As per Rivera’s request, the bathroom they occupied at Casa Azul, as well as the little storage space beside it, remained closed for 15 years after his death. Olmedo, whose direction was in many ways controversial, not only respected his will, but also lengthened it by keeping it close until her own death.
It is so that the closure of these spaces for decades, heightened the aura of mystery surrounding Kahlo’s figure, and it was only in 2004 that “el mìtico baño de la Casa Azul” was finally open.
It was left in a state of abandon and disorder, full of personal objects belonging to Frida. There were her clothes, the full traditional skirts, the corsets and the prosthetic leg that eventually replaced her bad one crippled by polio. None of them is now a secret, as many pictures were taken, and many exhibitions arranged throughout the world. Non the less, beside her clothes and stuff, it contained letters, pictures and many other personal objects.

It is exactly starting from this newfound material, as well as that of the Frida Kahlo and Diego Rivera archives in Mexico City –open in 2007, 50 years after Diego Rivera’s death and 100 hundred years after Frida’s birth- that this Milanese exhibition has been developed.
Diego Sileo, whom, in 2010, was the only European member of the research program on these new Frida Kahlo and Diego Rivera archives, is now, after 6 years of researches, the curator of the Milanese exhibition.

The works on display in Milan include the complete Dolores Olmedo collection and that of Jacques and Natasha Gelman.
Olmedo, who had scarce appreciation of Frida’s work, but, as opposed to that, was an enthusiastic fan of Rivera’s, bought her work to please the old painter in his last years and, by doing so, put together the most significant private holding of Frida’s works, composed of 25 paintings.
Jacques and Natasha Gelman, were part of a more conventional, yet amazing class of patrons, who collected art from all over the world, with a special care for that of living Mexican artists, starting from the Forties’ of the Twentieth Century.

Frida Kahlo Beyond the myth. What to expect

Given the premises, this exhibition should really satisfy every wish to deepen one’s knowledge of Frida so, what should we expect?
Of course the re-tracing of her intense life, the all-consuming romance with her irrepressible husband Diego Rivera, the physical anguish, the colorful clothing and the crowns of braids, but also more than this.
A taste of Mexico, a dive into the Mexican Renaissance, a colored journey through the art of retablos, as well as a more mature way to read and perhaps understand the work of an artist beyond biographical stereotypes.

Frida Kahlo Beyond the myth, some practical info

And if you wish to visit the exhibition with us, send us an email.